A Teenage Daughter’s Experience with Dementia

Any disease is heartbreaking, but a disease of the mind can be particularly painful.  For Alzheimer’s and Brain Awareness Month, our guest author, Orion Fox, describes her experience witnessing her mother develop early-onset Alzheimer’s disease, and then Frontotemporal Dementia.  Her story sheds light on what far too many people must witness and even go through themselves, and also shows the vast appreciation we have for the nurses and caregivers who are with them each step of the way.

At 47 years old, my mother was diagnosed with Early-onset Alzheimer’s disease. It was not until two years later that our family was given an accurate name for her illness — Frontotemporal Dementia (FTD).

AFTD.Org estimates that 50,000-60,000 Americans suffer from this disease, representing 10-20% of all dementia cases. The average age of diagnosis is 57 years old.  The course of the disease can range from 2 to 20 years, with the average length being 8 years.

Sometimes called Fronto-Temporal Lobar Degeneration or Pick’s Disease, this form of dementia affects the frontal lobes of the brain just behind the forehead. The left lobe controls language while the right controls behavior and emotions. Nerve cells in the frontal and temporal lobes die and the pathways that connect them change.

According to the University of California’s Memory and Aging Center, approximately 20-50% of Hereditary FTD patients have an affected first degree relative. Due to the stigma of mental illness, it did not become known until shortly after my mother’s diagnosis that my grandfather and his mother both suffered from this rare form of dementia.

Now that we had the name, definition, and connection to this disease, we finally understood my mother’s slow reaction time and her clouded decision-making. It explained why she no longer conversed on topic and seemed to talk more and more about the past. Even though we were finally receiving answers to our questions, we still had many more. However, they were not the kind of questions that any medical specialist could answer.

My mother loved going to church, so we went as often as possible. On one occasion, I stood sobbing as I watched her wander through the Church aimlessly and attempt to sing hymns she could no longer remember the words to. Some parishioners cringed at the disruption while others simply wrapped her in their arms.

Soon after the diagnosis, she started prescribed doses of Namenda and Fish Oil supplements. There was a possibility this medication could slow the progression of the disease but no promises were made. Her car keys were immediately taken from her, along with her freedom. What was left of my mother’s silly and outgoing personality vanished. She grew increasingly depressed and irritable.

At just sixteen years old, I could not comprehend what my mother was coming to terms with. All I knew was that despite all of our arguments, I still needed her. Confusion and anger ensued. I lacked the emotional maturity needed to deal with something like this. No one I knew could possibly relate. I searched the internet and found very few stories similar to mine. Some tried to console me by sharing stories about their own grandmother or grandfather with Alzheimer’s. I grew more frustrated with each word they spoke. I was watching my young mother wither away before my eyes. I recognized that she would not see me graduate college, land my first job, marry, or have children. The plans we had for our relationship had been stolen.

Prior to my senior year of high school, my father retired from the U.S. Coast Guard earlier than planned. We moved to a rural area for a slower pace of life.  At our new home, my mother enjoyed the porch swing and listening to birds. She felt the breeze rush through the Aspens and across her skin. She wandered the fields picking wild flowers and witnessed wildlife feed on my father’s garden. She rode on the back of the tractor as my father mowed, pointing out hawks overhead. She could not be left alone.

I noticed major changes each time I returned home from college. My mother eventually stopped talking all together. The daily prayer journal she kept became scribbles with misspelled words and transposed letters. She attempted to eat cereal from inappropriate dishes and hoarded knick-knacks in our family van. She grew paranoid of anything being thrown away including plastic bags, soda tabs, and even trash. I think she was doing her best to hold onto everything she could, literally and figuratively.

My father withdrew from society. He too was coming to terms with losing his wife and their dreams together. He became malnourished from focusing on her well-being and not his own.

Time progressed slowly while the illness continued to ravage my mother’s mind and body. Soon, she could only shuffle her feet. Her depth perception waned. When we eased her into the bath, she seemed to fear freefalling into an abyss. Her vision changed. Each time we helped her down the hall, the separate area rugs were pits to be avoided. We were forced to turn our door knobs backwards so that she could not wander outside and get hurt. At night, she sometimes stood rattling the doors.

My father filled their days alone with her favorite television shows, Elvis CDs, candies, kittens, and porch swings. He kept the Christmas tree up year round. By this stage, her facial expressions were nearly nonexistent. Her eyes seemed glassy and sometimes empty of all thought. She signaled she was still here with each slight squeeze of my hand, which were few and far between.

Nearing the end, her swallowing reflex became taxed. Spoon by spoon we reminded her to swallow. At this time, she was around 90 to 100lbs. She appeared sickly and resembled the elderly. She held her thumbs tightly in the palms of her hands — a common trait of FTD, so we were told.

In 2013, she passed away at the age of 57 due to complications of the disease. Her funeral fell on my parent’s 30th wedding anniversary.  My father and I sat quietly and listened to stories being told about her by those who hadn’t visited in more than a decade. A sobering lesson that I learned throughout my mother’s illness was that many individuals, even relatives, are uneasy interacting with the sick. Some live in denial to shield themselves from the pain of reality, no matter the cost to others.

I, myself, sought counseling to help deal with the grief of her loss long before her death. Several months after her passing, my father slowly reintroduced himself into the world. He continues to make great strides emotionally so that he can live each day to the fullest. The social anxiety he developed while caring for my mother has lessened and the realization that his life will and should go on is slowly sinking in.

In my mother’s short life, she overcame ovarian cancer, a miscarriage, the loss of her father, and the stress of continuously moving with the military. She was a fighter. Unfortunately, dementia was impossible to defeat.

Please take a moment to see my mother in the photos below. She was beautiful, vibrant, and full of life. She owned her own hair salon, enjoyed camping and fishing in West Virginia, as well as making quilts for those in need. Any person she met was a friend.  I choose to remember her at her happiest. I am relieved that she is no longer in pain and that she is free — mind, body, and soul. 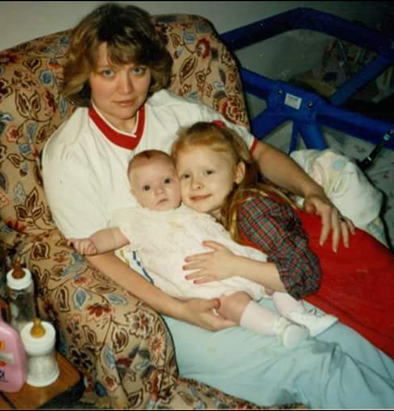 I encourage anyone who has had a loved one with FTD to reach out and tell us your story, share your pictures, and help us educate.  Thank you to all of the caregivers out there, like my father, who are truly selfless and special individuals.

Are you a Registered Nurse (RN), Therapist, or other healthcare professional looking for your next exciting opportunity?

Capital Healthcare has rewarding positions for RNs, LPNs, CNAs, and Direct Support Professionals in a variety of settings, with flexible hours to meet your needs!

Please contact us today and learn how we are dedicated to helping you achieve your goals.

For more of the latest updates, be sure to follow us on:

This site uses Akismet to reduce spam. Learn how your comment data is processed.