Multiple Myeloma Awareness – A Blogger’s Up Close Experience with Life, Death, and Growing Up (Not Necessarily in that Order)

“I know cancer is a big deal, but it really hasn’t affected anyone in my life directly, so it’s not that important to me.”  This cringe-worthy quote was made by a very oblivious and flippant teenage girl, who would later recall these words many times in abject horror throughout the coming years.  Do you ever have one of those memories that you look back on in disgust, wishing you could somehow shake that former version of yourself? Well, unfortunately, that particular memory belongs to me.  While I can’t remember the exact words I spoke that day in college, the general gist is there.  Cancer didn’t affect me directly, so I didn’t care.  Little did I know that not so long after, I would find out that my father had been diagnosed with stage III Multiple Myeloma, and I would never look at cancer in the same way again.  In honor of my father, and Multiple Myeloma Awareness Month,  I am taking a more personal route in this week’s blog to tell you about this common yet relatively unknown type of blood cancer that has not only greatly affected my life, but is estimated to affect the lives of about 30,000 people this year.

Throughout my life, I always remember my dad having back problems.  He had undergone surgery for bulging discs when I was a preteen, and previously had sciatic nerve problems as well.  So, when he started having back pain again as I got older, I assumed it was most likely a related issue.  When doctors dismissed his concerns, and physical therapy left him in severe pain, we weren’t really sure how to proceed.  I continued to be wrapped up in college assignments and activities, and he unknowingly continued to spend at least eight hours a day doing labor in a warehouse, while cancer was spreading throughout and weakening the bones in his back.

The problem with detecting multiple myeloma is that the early stages of it typically don’t present any visible signs or symptoms, and there is no early screening test specifically designed for it.  Additionally, if someone is experiencing symptoms, they can be easily mistaken as symptoms for other conditions.  Routine blood work can detect multiple myeloma, due to unusually high levels of protein being present in the blood, but oftentimes it is not detected at all until it has reached the advanced stages, accompanied by symptoms like fatigue, weight loss, bone pain, and anemia.

It’s funny how things end up happening sometimes, and with little to no rhyme or reason.  We’ll never know how that random lump appeared on my dad’s back that day, but it certainly served its purpose of finally convincing him to go to the Emergency Room.  Stage III Multiple Myeloma was found, and that lump never appeared again.  We finally had an answer as to why he felt so miserable, but Stage III of anything isn’t a stage you want to be on.

Basically, the way multiple myeloma works, is that cancerous cells start to form within the plasma cells that are found within the bone marrow.  These plasma cells, or white blood cells are typically responsible for producing antibodies, known as immunoglobulins, which play a critical role in maintaining the immune system.  However, in the instance of multiple myeloma, these healthy plasma cells morph into malignant myeloma cells, which then produce abnormal antibodies called M proteins.  When enough of these M proteins are present, they leave no room for the vital immunoglobulins, which can lead to bone damage or kidney problems.  Most often, multiple myeloma will occur in the spine, ribs, pelvic bones, hips, or shoulders.  It is common for soft spots, or osteolytic lesions, to form in the bones, which can result in weakened bones and fractures.

My dad’s journey with multiple myeloma throughout the following few years was like a cancerous roller coaster.  Clinical trials produced positive results for a while, even giving us hope through remission on more than one occasion.  However, it never ended the way we willed it to.  The cancer always had a way of returning, in new areas and forms, throwing us for a loop and diminishing any amount of hope we had tucked away.  Something as common as a broken bone never truly meant just a broken bone for him.  Instead of a receiving a cast and going home, it was a bumpy and painful car ride to a larger urban hospital, the discovery of new cancer cells, and surgery.  Cancer is not simple, and neither is the journey.  Positivity can do a lot, but at the end of the day, the journey really (for lack of a better word) sucks.

Despite chemotherapy, radiation, and even a very intense stem cell transplant, multiple myeloma was something that my determined, faithful, hard-working father just couldn’t shake.  One of the biggest challenges with this type of cancer, too, is that it leaves its mark.  Even during those brief periods of remission, the shape and functionality of his body had changed.  His back was no longer straight, and he was noticeably shorter.  He could no longer do the type of work that had put food on our table for over 30 years, and he had to start letting us take over household tasks that he’d previously done with ease.  My once strong and capable father was now left fragile and insecure, and that was probably the most heartbreaking aspect for everyone involved. 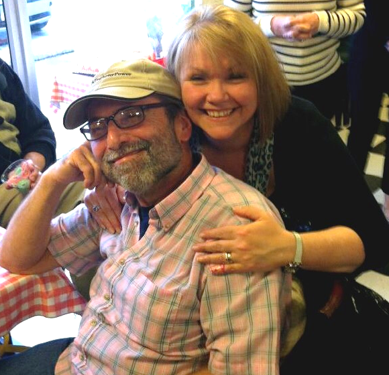 During this period of time I was able to graduate from college and move back home to wait for adulthood to fully kick in.  Although I did not yet have money or a “big-girl job,” I was able to be present in my dad’s daily life, and witness this roller coaster firsthand.  Looking back, you always wish you would have done more, or had perhaps done certain things differently, but I’m very grateful that my full transition into adulthood was delayed.  It gave me time…but at the end of the day, is there ever really enough?

My father lost his battle with multiple myeloma on March 15th, 2013—the Ides of March, as it’s called.  (I’d like to tell him that he and Julius Caesar have more in common than he ever thought.  For now, I’ll just have to keep it in my back pocket.)  He was only 56 years old.  I’d be lying if I said that I hadn’t tried to mentally prepare myself to say goodbye to my father at an early age, but I don’t think any of us expected it to happen quite that soon.  Since then, he’s missed three weddings, including my own, and the birth of what would have been his fifth grandchild.

It’s extremely easy to remain angry or bitter over what was lost, and what could have been, but there’s only so much of that one person can take.  Since then I have let much of my anger dissipate, but I look at life much differently than I ever did before.  I no longer recognize the “me” I quoted, and I’m not solely concerned with matters that just affect me personally. The sometimes heartbreaking experiences of growing up have a way of doing that to you.

I’m sharing my observations simply to raise awareness for this devastating disease that so few people seem to know exists, some until the fateful day they are diagnosed.  My hope is that by reading and sharing this, you might just give someone the motivation to have yearly exams and routine bloodwork done, and then hopefully more cases of multiple myeloma can be detected when there’s still time to do something about it.

If you’re struggling through an experience similar to mine, you can reach me anytime at madams@chsstaff.com.  I’m by no means an expert, but I’d like to think I’m a pretty good listener.

Are you a Registered Nurse (RN), Therapist, or other healthcare professional looking for your next exciting opportunity?

Capital Healthcare has rewarding positions for Med/Surg RNs, ICU RNs, OR RNs, Physical Therapists, Occupational Therapists, and many other specialties in amazing destinations throughout the country!

Please contact us today and learn how we are dedicated to helping you achieve your goals.

For more of the latest updates, be sure to follow us on:

This site uses Akismet to reduce spam. Learn how your comment data is processed.